Could the RICO Act be applied to 1MDB? 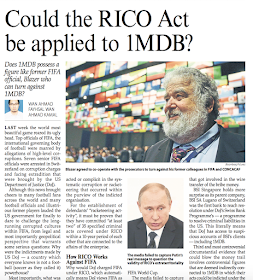 Last week the world most beautiful game rear its ugly head. Top officials of FIFA, the international governing body of football were marred by allegations of high-level corruptions. Seven senior FIFA officials were arrested in Switzerland on corruption charges and facing extradition that were brought by the United States Department of Justice (DOJ).

Although this news brought cheers to many football fans across the world and many football officials and illustrious former players lauded the US government for finally dare to challenge the long-running corrupted cultures within FIFA, from legal and most importantly geopolitical perspective this warrants some serious questions: why were the indictments were made by US DOJ – a country which everyone knows not a football (soccer as they called it) powerhouse?

Most importantly, what was the legal basis for US DOJ to issue the 47-count indictment and extradition against FIFA officials who are mostly non-US citizens that are not subject to any jurisdictions under the US federal law?

It could be made possible only via chapter 96 of Title 18 of the US Code - a criminal and penal code under the federal law of the US or best known as the RICO Act.

The RICO (Racketeer Influenced and Corrupt Organizations) Act is federal law that confers wide powers to prosecute organized crime on the grounds of financial malfeasance. It was widely use in the 70s to curtail mafia racketeering, which consists of multiple crimes such as money laundering, bribes, extortion, wire fraud and many others.

Before RICO existed, the authorities were having hard time to pin down the mafia en bloc as their criminal acts were slyly covered and fronted by legal businesses and operated through various individuals that seemed to hold no connection among one another.

To combat this menace, the US Congress passed RICO and it was an effective piece of legislation to curb organized crime that runs like an enterprise. RICO’s applicability hinges not only on the proven existence of an enterprise – be it association of individuals or corporations but also the defendant must possessed a ‘scheme’ and ‘predicate acts’.

A scheme provides the liability and basis for the indictment on racketeering pattern for the predicate acts – a set of criminal activities listed under the US federal statutes such as wire fraud and money laundering  – that are committed by members of the enterprise.

In short RICO acts as a dragnet to prosecute individuals from the same or affiliated to the enterprise in which they acted or complicit in the systematic corruption or racketeering that occurred within purview of the indicted organization.

For the establishment of defendant’s ‘racketeering activity’, it must be proven that they have committed ‘at least two’ of 35 specified criminals acts covered under RICO within a 10 year period of each other that are connected to the affairs of the enterprise.

How RICO works against FIFA

Why would DOJ charged FIFA under RICO, which automatically means DOJ views FIFA as a form of mafia group? Perhaps DOJ realized the corruptions in FIFA are rife and endemic hence it will be easier to pursue the corrupted ‘enterprise’ that exhibits racketeering pattern.

On surface there’s nothing shocking about RICO if it is applied within the US territories but the indictment unto FIFA begets the real question: does RICO have the juridical capacity to be applied outside US or in legal term – ‘extraterritoriality’ – as it was originally enacted under the US federal statute and not part of international law?

US DOJ found out that within the 47-count indictment against FIFA, the predicate acts such as wire fraud, money laundering, bribes and illicit payments were allegedly took place in the US or filtered through US bank accounts – which gave them the jurisdiction to pursue penalties against FIFA’s officials on federal racketeering charges.

When the whole world rejoiced on the indictment, Russian Premier Vladimir Putin rebuked Washington. Mainstream media tried to frame Putin’s disapproval as a sign of Russia’s covering of their alleged corrupted practices for winning the bid to host the 2018 FIFA World Cup.

The media failed to capture the real message of Putin on questioning the validity of RICO’s extraterritoriality that could set a dangerous precedent for the US federal law to go places where it originally holds no jurisdiction and sovereignty.

The indictment by DOJ would not be possible, as many believe, without an insider who could reveal the corruption trails. The man who many suspected was Chuck Blazer, former FIFA top officials from the US who himself was indicted in 2014 on corruption and tax evasion charges.

Blazer agreed to co-operate with the prosecutors to turn against his former colleagues in FIFA and CONCACAF – the North America and Caribbean football governing body as part of his plea-bargaining for lenient sentences.

What are the potential exposures for 1MDB to be indicted under RICO if the prosecutors managed to establish a racketeering pattern of predicate acts within an enterprise called 1MDB?

At very fundamental level, 1MDB transactions and wire transfers would have been made in US Dollar through the SWIFT international payment system.  This factor alone would made 1MDB susceptible to be investigated and indicted under RICO as the predicate acts (e.g. wire fraud) fall under the US federal criminal law and the RICO Act.

Secondly 1MDB’s investment that was first parked in Cayman Island and then claimed to be repatriated to BSI Bank in Singapore could be another potential exposure to RICO. Latest FIFA indictment under RICO named two offshore banks in Cayman that got involved in the wire transfer of the bribe money.

BSI Singapore holds more surprise as its parent company, BSI SA Lugano of Switzerland was the first bank to reach resolution under DOJ’s Swiss Bank Program' – a program to resolve criminal liabilities in the US. This literally means that DOJ has access to suspicious accounts of BSI’s clients – including 1MDB.

Third and most controversial circumstantial evidence that could blow the money trail involves controversial figures that are deemed indirectly connected to 1MDB in which their acts could be indicted under the predicate acts of RICO. As reported by Louise Story and Stephanie Saul of The New York Times, a young wealthy Malaysian by the name of Jho Low who broke into the scene of rich and famous by purchasing record-breaking million dollars worth of painting (Basquiat’s Dusthead) and an opaque condo purchased using limited liability shell company – a typical setup in performing money laundering activities.

What made him more suspicious was he is also a close friend to Riza Aziz who is a stepson to Prime Minister Dato’ Seri Najib’s – the chairman of Board of Advisor to 1MDB and the Finance Minister who are in charge of overseeing 1MDB as an entity under the MOF Inc.

Jho Low vis-à-vis 1MDB was also mentioned in the United Kingdom court case McKillen v Misland (Cyprus) Investments Ltd and others (2012) pertaining to legal dispute involving Low’s The Wynton Group failed bid of Claridge’s Hotel Group in London. In the full written judgment, Judge David Richards clearly mentioned that the bid by The Wynton Group was backed up and fully underwritten by 1MDB.

There are many more examples to implicate 1MDB under RICO but from the samples above we can sufficiently deduced that 1MDB has high-risk exposure and liable to be indicted under RICO. Perhaps it would not unfold in a straightforward manner and require an informer like Chuck Blazer of FIFA to expose the whole racketeering.

The question is does 1MDB possessed a figure like Chuck Blazer who could turn against 1MDB? High chance they do and we all know who.

This article was originally published by The Malaysian Reserve on 8th June 2015.
Rausyanfikir
Kongsi